Co-production seems to be the latest buzz word to be found in all sectors of public service and some would argue that is means different things to different people. In the participation networks that took place at the beginning of May, we explored what co-production means to people and tried to make sense of what it means in the context of participation and engagement. Participants at the network also shared a lot of examples of co-production happening in their projects/organisations – but not everyone is calling it ‘co-production’. As we’ve learned in previous network events (February 2014, October 2013) it’s important not to get bogged down with definitions.

We began each network meeting with an ice-breaker exercise. We asked participants to form pairs and think about what co-production might look like, what is probably is and what it probably isn’t. This exercise wasn’t aiming to pin a definition down into words but aimed to identify what working co-productively actually entails. 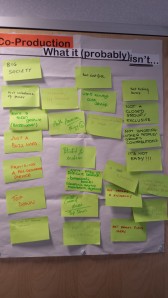 The group identified that co-production is not a tokenistic approach to engagement; it’s not just about saving money and not about consultation. The groups also recognised that shared power, working towards a common goal and recognising people as assets capture what co-production ‘probably’ is – synonymous with Edgar Cahn’s core values of co-production:

Barod has developed a method that they call coffee shop conversations and they used this technique when developing the Being at the Centre publication. The method involves listening to people’s views in a relaxed environment (coffee shop or cafe) as opposed to a formal consultation meeting.

Our speaker in South East Wales was Gareth Coles, Public Service Delivery Officer in WCVA. Gareth asked participants to think about the barriers to working co-productively and they came up with:

The group then discussed what steps organisations can take to work more co-productively:

In South West Wales, the speakers were Rick Wilson from Community Lives Consortium and some project leaders from the Time to Meet project. Time to meet is organised by people with learning disabilities and their friends, family and staff in Swansea. It is there to help members to build stronger social lives with people around them by sharing skills, interests and time. This includes jewellery making workshops, card making workshops, coffee mornings and lots of other activities including their own version of Come Dine with Me called Come Eat With Us!

Rick demonstrated a method they use to identify what their members want to do. We were each given red pieces of paper and blue pieces of paper. The red piece had a question: What would you like to do? And on the blue piece: What do you like doing, or are good at doing? Once we’d all written our answers down we put all the papers on the floor and grouped them together. It turned out that a lot of us wanted to learn about gardening and cooking and there were also people in the room who already had knowledge about these topics so as a group we’d immediately identified an opportunity for people to learn and a resource to do so. 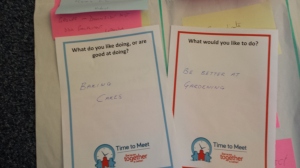 To end each network meeting we always break into small groups to share recent pieces of work and examples of good practice or just to continue general discussion. Finally participants are asked to complete a participative evaluation exercise.

Participation Cymru no longer receive any funding to facilitate and organise these participation networks so we’re very grateful to the participants’ organisations for providing the venues and refreshments (on this occasion: Careers Wales – Bangor, South Wales Fire & Rescue HQ – Llantrisant and Carmarthenshire County Council). We’re also very grateful to the speakers for giving us their time. We will endeavour to keep these network meetings going and the next round of meetings in October will focus on participative tools and techniques so if you would like to demonstrate or try out a technique or if you’re able to contribute anything else to these networks then please get in touch.

Next week, Non Humphries will blog about Co-Production in Action.